The changing landscape of women in golf

A few decades ago, the game of golf was considered a predominantly male affair with women rarely seen out on the course.

This International Women’s Day, we take a look at the participation of women in golf. With more female tournaments hitting the headlines and thriving Ladies’ sections across UK golf clubs, clearly things have changed for the better. But what does the picture look like in 2022?

With great mental, physical and social benefits, golf is a low impact sport that should appeal to many. Yet nationwide, only 15% of club members are female in the UK according to England Golf, lagging behind our European counterparts.

Nevertheless, despite uptake of female golfers remaining sluggish over the last few years at around 12-14%, the pandemic prompted a noticeable shift. The total number of women playing a round of golf in the UK from 2019 to 2020 grew from 14 percent of all golfers to 28 percent.

With 15 golf and country clubs across the UK, The Club Company has welcomed more women into golf-specific roles such as greenkeeping over the last few years, and six clubs now have a female General Manager at the helm. As more women enter professions such as club and course management, greenkeeping and coaching, the distance between the stereotypical ‘men’s game’ and the reality of the sport today grows wider. Below, we speak to two women about their experiences of working in this traditionally male-dominated industry.

In a new role at The Club at Meyrick Park, Molly Pavey has played golf since the age of eight, so a career centred around the sport felt like a natural fit. As Golf Operations Manager, her responsibilities centre around the community of members and management of golf events. She loves the sociable nature of golf; “When I was playing as a child, I could be playing with 70- or 80-year-olds, someone in their forties or a kid my own age – you meet such a wide range of people and hear so many different stories.” 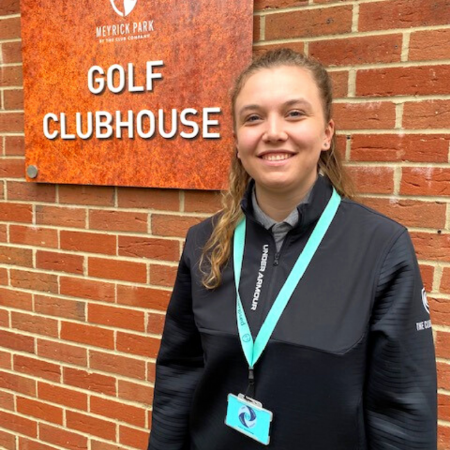 Women’s golf tournaments such as the Chevron Championship, which kicks off at the end of the month, and the Women’s PGA Championship are in the spotlight like never before, with more media coverage and increased prize money.

Molly has also noticed more women taking up the sport in the last few years. “There are younger women coming through now, some in their 20s and 30s. With Ladies’ sections growing, I think more people are catching onto that. Some of the women’s tours are being televised a lot more, so they’re getting the recognition in that way as well.”

How did she make it into her current role? “It’s been a struggle making that step into the industry at times. Unfortunately, you do have to work that little bit harder and get to know members that little bit better. I may have to explain my background a bit more than someone else might. But I think once you do and you’ve broken down that barrier, people really respect it.”

As Founder of the Jo Oliver Golf Academy and resident Golf Pro at Chesfield Downs Golf Club, Jo Oliver has seen a lot of changes in the industry over the past few years.

First taking up golf around age 14, by the time she was 16 she had made it into the England Elite Squad. “I totally got absorbed in the sport - I practised all the time. I wouldn’t say I was a naturally gifted player – I put a huge amount of work in, as I tend to do with most things - and got good pretty quickly.”

Jo was a member of the Ladies’ European Tour since 1997, playing on tour on and off all that time. When she first started out, there were noticeably fewer girls playing. “I was probably the only girl at my club at the time, and a lot of courses had maybe one or two girls if they were lucky. There were lots of people around who encouraged the girls that did participate, but there definitely wasn’t the national drive to generate the interest in the sport from women and girls that exists now.”

Jo is proud of the career she’s built for herself, but recognises it hasn’t always been plain sailing. “It’s not for the faint-hearted. As is the case for a lot of women’s pathways into sport, whenever you’re in the minority you’re always going to have to fight your corner. That’s certainly what I’ve had to do, as do a lot of my friends who are Golf Pros or Head Pros.”

Nationwide initiatives are raising awareness of golf among girls, such as England Golf’s joint campaign with the Golf Foundation ‘Girls Golf Rocks,’ which encourages girls aged between 7-14 to pick up a club for the first time in a fun and friendly environment.

As the Lead Coach for Hertfordshire Girls Squad, getting more girls into golf is something Jo is passionate about - but she’s also keen to present a diverse picture of the sport to all children. “It’s really important for girls to see female coaches and understand that’s a pathway they could take. But it’s equally important - maybe even more so - that boys experience being coached by both women and men, so their perception of golf being a male environment is no longer true. I always applauded Andy Murray when he had a female coach for a while, because he was very much used to seeing his mother in a coaching role - I’m sure that had an influence on who he decided was best to help him at whatever time.”

Progress is encouraging, and there’s no doubt that the pandemic has accelerated an uptick of women taking to the golf course for the first time. Long-term strategies will now be key to attracting and retaining women and girls currently engaged with the sport.

Molly would like to see more women entering the industry. “It can be encouraging for lady members to see other women working in golf – it doesn’t have to be male dominated. I think the industry has changed in the last five years with getting more women working in golf and having the qualifications to do so. It helps others relate to the game more.”

Jo is optimistic that the sport will continue to become more diverse, and credits Chesfield Downs for the club’s inclusive and welcoming environment. “It’s a huge attraction for men & women coming in, because they feel the friendly, neutral environment. There’s no snobbery, so it changes how people perceive golf. You will see people leave private clubs more locally because they felt there was a clique which they didn’t like, or they were worried about doing something wrong all the time. It’s so important that someone feels like they belong – you’re there as an equal like everybody else.”


About The Club Company

Majority-owned by Epiris LLP, The Club Company operates 15 country clubs, the majority of which are located in central and southern England. The clubs offer a range of facilities to their members, including championship standard golf courses, premium health and fitness facilities, swimming pools, tennis courts, bars, restaurants and accommodation.